RTC to Study Bus Use of Freeway Shoulders

The RTC Board approved a contract on April 5 to study the feasibility of allowing transit vehicles to use the shoulder when freeway travel lanes are congested, a technique which has been successfully applied in many parts of the country.

The Bus on Shoulder (BOS) Feasibility Study came of out the recommendations of the I-205 Access and Operations Study which was charged with identifying low cost improvements for roadways and transit to improve mobility on I-205. For transit, the study looked at both traffic congestion levels and the amount of bus service on I-205 and SR-14 and found that having buses operate on the shoulder during times of heavy congestion has the potential to improve transit travel time and reliability, expand transit ridership and facilitate low-cost transit expansion in the corridor. While experience in other regions has shown that use of shoulders by buses can improve transit without impairing mainline traffic, there are a lot of unknowns about it would work on I-205 and SR-14.

These questions include how the buses would operate alongside mainline traffic and its impacts on traffic congestion and safety. Freeway shoulders are used for vehicle breakdowns, law enforcement and other emergencies and how these needs may be affected by bus shoulder use needs to be examined. In addition, every transportation facility is unique in its ability to accommodate transit on the shoulder because of varying shoulder widths and pavement depths. These are the types of questions the study is intended to answer.

The study will investigate and research the issues associated with potential implementation of BOS and determine its applicability to the I-205 and SR-14 corridors. It will identify the technical and engineering considerations, including the identification of barriers, challenges, and opportunities. The study will evaluate traffic operations and transit operations and performance with and without BOS, develop a BOS concept plan and operating protocol, identify capital components, investigate policy issues, and determine regulatory/legal requirements for BOS operation.

The BOS Study is the first phase of a possible two step process. Phase one will investigate and research the issues associated with potential implementation of BOS and determine its applicability to the I-205 corridor.

A key result of phase one will be a recommendation to agency stakeholders on whether the region should move forward with a more comprehensive phase two study. If the region policy makers agree, phase two implementation planning would address physical improvements and associated preliminary engineering, bus operating protocols, a detailed bus service plan, and capital costs.

Although RTC will lead the effort and will manage the work tasks, the study is a partnership of transportation agencies that would be directly involved or affected by a bus on shoulder operation. These include the Washington and Oregon Departments of Transportation who own the facilities buses where buses would operate, C-TRAN and TriMet whose service would use or be affected by a BOS operation, and RTC and Oregon Metro as the regional planning organizations for the bi-state region. 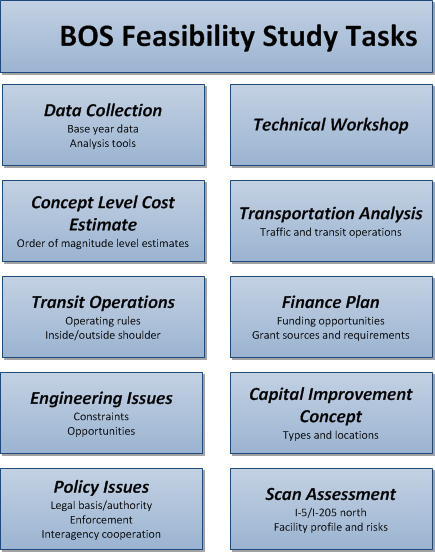 The study corridor encompasses the I-205 corridor from the 18th Street interchange, now under construction, south to the I-84 interchange and on SR-14 from I-205 to 164th Avenue. SR-14 is included because of the high congestion levels and the number of buses traveling between Fisher’s Landing Park and Ride facility and Portland that use the facility. An outline study tasks is displayed below.

A key element of the study is the bus on shoulder technical workshop that would have participation by RTC Board members, policy makers, public safety representatives, and technical staff. The workshop will be in two parts: the first half is educational and will focus on the operational engineering and technical issues for BOS in general as well as experiences in other parts of the country. It will include experts with direct experience and knowledge of BOS systems to share their insights and lessons learned. They will also review information developed for the study corridors, facilitate discussion, and answer questions from workshop participants. The second half of the workshop is more technical and will focus on specific I-205/SR-14 issues with the goal of developing a BOS operating concept.

What is Bus on Shoulder?

Bus on shoulder systems have been around for a long time. Bus priority treatments on streets and highways have been operating effectively throughout the United States for about a half century. Many systems have been built over the last 20 years and are now a widely accepted treatment to improve transit reliability and mobility. A BOS system is a relatively simple concept in that it allows transit vehicles to use the shoulder on a freeway or arterial during times of heavy congestion.

The general operating rule is that buses that normally operate in regular traffic lanes would move to the shoulder when mainline travel speeds drop below a predefined speed. In many regions the speed threshold is set at 35 mph. Since buses operate in the shoulder only during specified traffic conditions, a more descriptive name for this might be “dynamic” BOS. In addition, buses on the shoulder do not operate more than 15 to 20 mph faster than the roadway traffic, depending on bus driver training, shoulder characteristics, ramp conflicts, local operating protocols.

BOS Systems in the United States

As of 2012, there were more than fifteen BOS systems operating in the United States. Most of them operate on the outside shoulder with a few using the inside shoulder. The systems range from just a few miles in length, such as in San Diego, up to comprehensive systems, like the Minneapolis-St. Paul region, with a 300 mile network of bus shoulder lanes. Some systems operate only between interchanges with others serving as continuous lanes along a corridor. While many of the systems in operation have used the Minnesota experience as a template, a common thread for the BOS systems has been the flexibility to develop each system in accordance with the needs and characteristics of their local operating environment. After the planning and initial development many areas have first implemented demonstration projects, analyzed its operations and used the results to guide final development of transit/traffic speed differential, operating protocols, and rules for incidents or other vehicles on the shoulder.

A summary of four different bus on shoulder systems follows:

Minneapolis, Minnesota: The Twin Cities region has a 300 mile network of BOS lanes. They operate on the outside shoulder and are not restricted by time of day. Buses can use the shoulder anytime the freeway speeds drop below 35 mph and can operate up to 15 mph faster than adjacent traffic. The first BOS corridor was implemented quickly in response to a Mother's Day flood in 1993 that closed a bridge on I-35, one of the major access points into the city. Within ten days, freeway shoulders were restriped and BOS was implemented, providing an alternate route into the city. This emergency test operation was so successful that officials began to look at applying it to other corridors. At the beginning of the development process the goal was simply based on the opportunity for easy implementation. There were no shoulder or pavement depth standards, although these standards were developed later as the system grew and matured.

Raleigh-Durham, North Carolina: In 2013, Triangle Transit implemented 40 miles of an outside shoulder system on I-40 used by 9 different bus lines. I-40 goes into Raleigh from the northwest and from the south into the city. The BOS initiative is partnership between North Carolina Department of Transportation and Triangle Transit and was modeled after bus on shoulder program in Minnesota with same operating rules. Triangle’s policy, like Minnesota’s, that priority for use of the shoulder was for emergency responders and vehicle breakdowns which eased local concerns. Sections they implemented on I-40 already had good shoulder width and pavement depth and did not need any major reconstruction. NCDOT and Triangle Transit see it as a cost effective approach to improve transit efficiency and reliability.

Miami, Florida: Nine miles of BOS were opened on SR-874 and SR-878 in 2007 following a planning study that was completed in 2005. The study identified the adequacy of the shoulders, the amount of emergency service vehicles using the shoulders, current and planned transit services and then established criteria for use of the shoulder. In Miami, buses are allowed to operate on the outside freeway shoulder anytime speeds drop below 25 mph. This is different than Twin Cities, where the traffic threshold for transit use of the shoulder is 35 mph or less. Buses in Miami are not allowed to operate more than 15 mph faster than vehicle traffic. They must also yield to entering, merging, and exiting traffic and to emergency and law enforcement vehicles. When the shoulder is occupied by a disabled vehicle, law enforcement, or other obstacles buses are required to move into the general purpose traffic lane. These operating rules are similar to Minnesota’s.

Chicago, Illinois: PACE, the suburban division of the Chicago Regional Transit Authority, implemented BOS in 2011, with a 15 mile segment on I-55. Like many other systems buses are allowed to use the shoulder when freeway speeds drop below 35 mph. Transit vehicles cannot travel more than 15 mph faster than general purpose traffic and are limited to a maximum speed of 35 mph. Unlike Minnesota, BOS operation is restricted by time of day allowing use only from 5-9 AM in the northbound direction and 3-7 PM southbound. Unlike the other systems, PACE is an inside shoulder system. The left shoulder was selected in order to minimize conflicts with ramps and interchanges. In addition, the outside shoulder on I-55 is narrower on several segments with more physical constraints than the inside shoulder. Like other regions, emergency use of the shoulder has priority. Buses are required to leave the shoulder if it is occupied for any reason.

Questions about the Study? 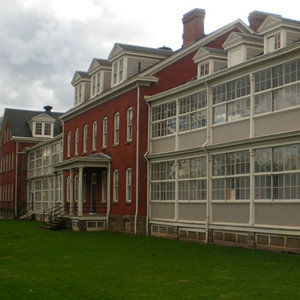